Woke up to thunder and rain Friday morning, “Great, just great” I said to myself.  We’ve been having some decent weather the last few weeks and when I want it most, it goes back to grey, wet, and windy.  Either way, I was excited to go on this retreat.

At 12pm, I met up with 3 classmates to make the drive to Bastyr University in Kenmore.  Bastyr is an institution that specializes in science-based natural medicine, and was the first accredited naturopathic school in 1989.  The campus rests on 51 acres along the woodlands of Lake Washington.

Even before any of the activities started, I easily found a sense of calm and relaxation here.  After playing a few SAGs (Stupid Ass Games) to get us loose, we were allowed to move into our “dorms”. 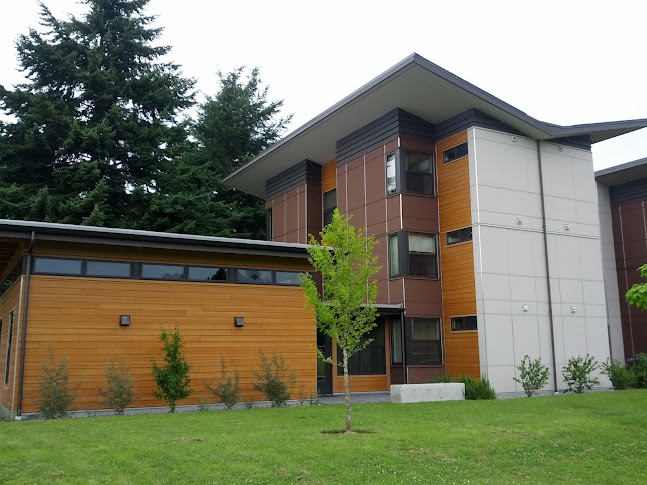 I’m not sure about you, but this was the nicest dorm I’ve ever stayed in.  The dorms were also  green-built, LEED-registered and ADA-compliant. 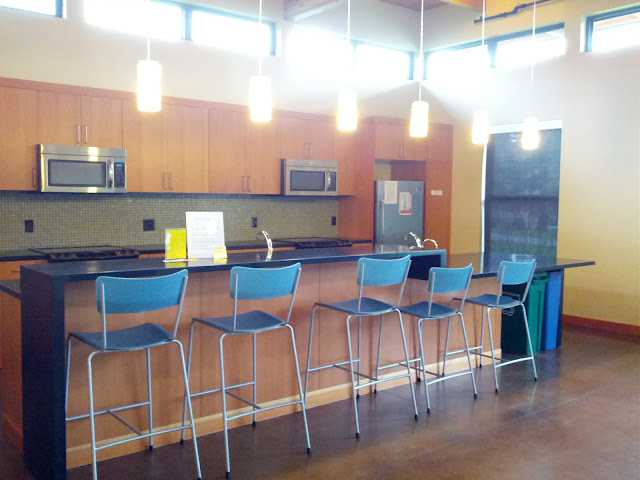 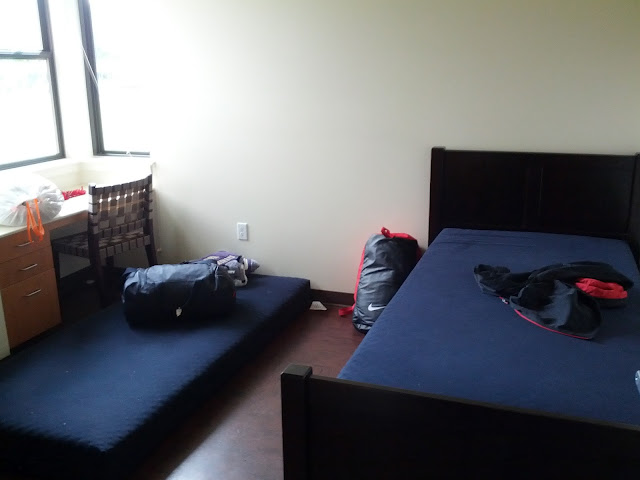 And just like dorming back in undergrad, I figured having a roommate would only make the experience better.  (Lars, sorry if my snoring kept you up!).

Our first major activity was a trust walk. Half the group was blindfolded and the other half had to guide them through the forest.  Rules:  ZERO TALKING, but touching is allowed.

The trail was windy, had random inclines and declines, obstructions, and even a small river.  Being the first group to lead the blind, I decided to steer my person from behind by placing my hands on his shoulders and pointing him in the proper direction.  I NEVER lost contact with him.  When we came to inclines, declines, and obstructions I would stop him and slowly guide his feet to where it needed to be with hopes he would catch on.  When we approached logs that we needed to climb over, I placed his hand on the log to make him aware that he needed to lift his entire leg.

After 20-30 minutes of walking, it was my turn to be blind folded.  The person guiding me placed his arm around my shoulder and walked parallel with me.  I really liked this approach since I had high sense of reassurance that he was with me at all times and felt very secure if I were to fall or slip.  My guide utilized sounds by stomping on the ground when we came up to obstacles to alert me.  After we successful navigated each obstacle he patted my chest twice to tell me “good job.”

Reflection:  Although I thought my technique of “steering” was ok, it wasn’t the best.  Looking back, I was just pushing him rather than walking with him or even leading.  Sometimes I couldn’t even see around him (since he was taller and had very broad shoulders), and at time I missed rocks and stumps, but thankfully he was talking small nimble steps.

I feel the technique used on me when I was blindfold was ideal.  My guide was standing right next to me, arm around my shoulder.  Rather than being behind me and “trucking” me through it, it felt as if he wanted to be equal with me, trying to place himself as a mirror of me in a way.  Although I do not require positive reinforcement, it was nice to be told “good job” every time we managed to overcome something.  Lastly, the arm around my shoulder at all times gave me reassurance that he was with me every step of the way, literally.  It also gave him great support if I were to misstep.

We were divided into three groups.  Our objective was to have each team member step on a range of numbers, in an increasing order, that were placed in a circle 15-20  yards from us. 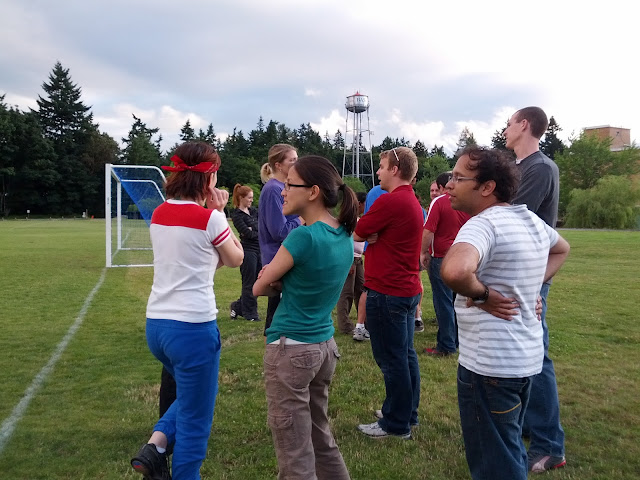 Teams looking out towards the field trying to see how many numbers there are.

Framework:  We were three divisions working for the same company.  Our goal was the get the lowest time to beat a “foreign” time.

Rules:  Run to the circle, one team member can be in the circle at a time, each team member must step on at least one number, and all numbers must be stepped on in increasing order.

What made this tricky is the numbers were in scattered randomly in the circle, there were missing numbers between 0-31, some were written as “31-5” (31 minus 5), and we could only see the numbers when we ran from the start line to the circle (so basically going in blind). 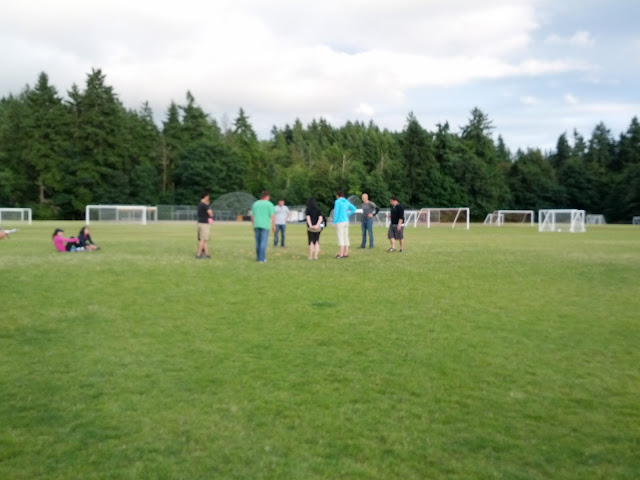 Team #1/Seattle around the circle counting what numbers are present and their location.

Our team’s strategy were to take two numbers each and position yourself so you can run through them in a straight line.  Person #1 would have the first two numbers, person #2 would have the next two, and so on.  By sheer luck, the rotation ended on me, meaning our time stopped once I sprinted back towards the start line.

Reflection:  Even though all the teams “worked” for the same company, we were very reluctant to work with each other.  We would win this challenge if any group’s time was lower than the “foreign” time, however, many felt as if we were competing against each other.  By physically separating us into groups, but not saying we can only talk to our groups, tends to force individuals to only converse to those in close proximity to them, or in this case, our group.

We were told after all of our activities, we’d have a period of “deep lounging” or aka drink, eat, and relax!  Rules were beer and wine only, apparently hards were allowed but someone/some people got out of control. 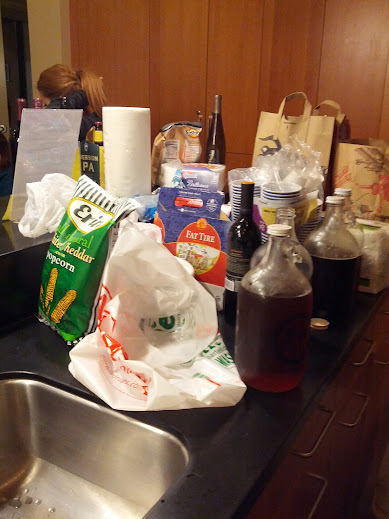 Prior to coming here, we were told that all meals were going to be vegan.  With that said, we had to two people bring their grill and a ton of meat! 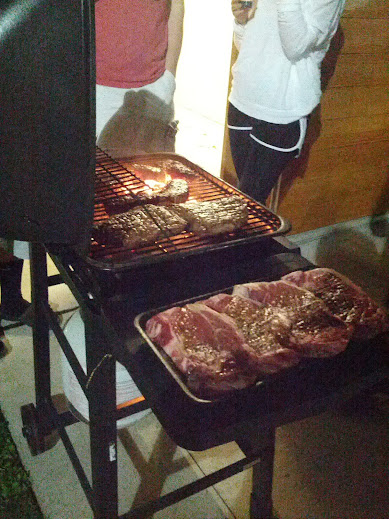